While Doran Construction was building The Bridges, an 11-story student apartment complex near the University of Minnesota in the snowy winter of 2014, average February temperatures were the coldest since 1979. With temperatures 10-to-12 degrees frostier than normal, the Bloomington, Minn., family-owned general contractor ran into troubles at the concrete and glass tower, specifically with the mineral wool insulation used in assembling the wall.

The insulation delivers satisfactory fireproofing qualities, but as an insulator, air tends to flow freely through it. In the bitter temperatures, the building became exceedingly cold, slowing the project down and costing more as propane fuel prices doubled. Condensation problems developed, triggering other headaches in remedying them. “This made it very difficult to keep the project on track,” recalls Scott Casanova, Doran Companies senior vice president.

Enter another Doran Construction project: the nearly $54 million, 13-story, 319-unit Latitude 45 luxury apartment building with the Mississippi River and Minneapolis’ skyline as its backdrop. While working on the student-housing project, Casanova and Doran also planned the post-tension concrete Latitude 45 building with the same architect and wall design.

In short, the three-in-one Thermax™ Wall System delivers continuous insulation, which eliminates the need for two separate production installations – an exterior sheathing and an air barrier in commercial construction. Such insulation is continuous across all structural members without thermal bridges other than fasteners and service openings. 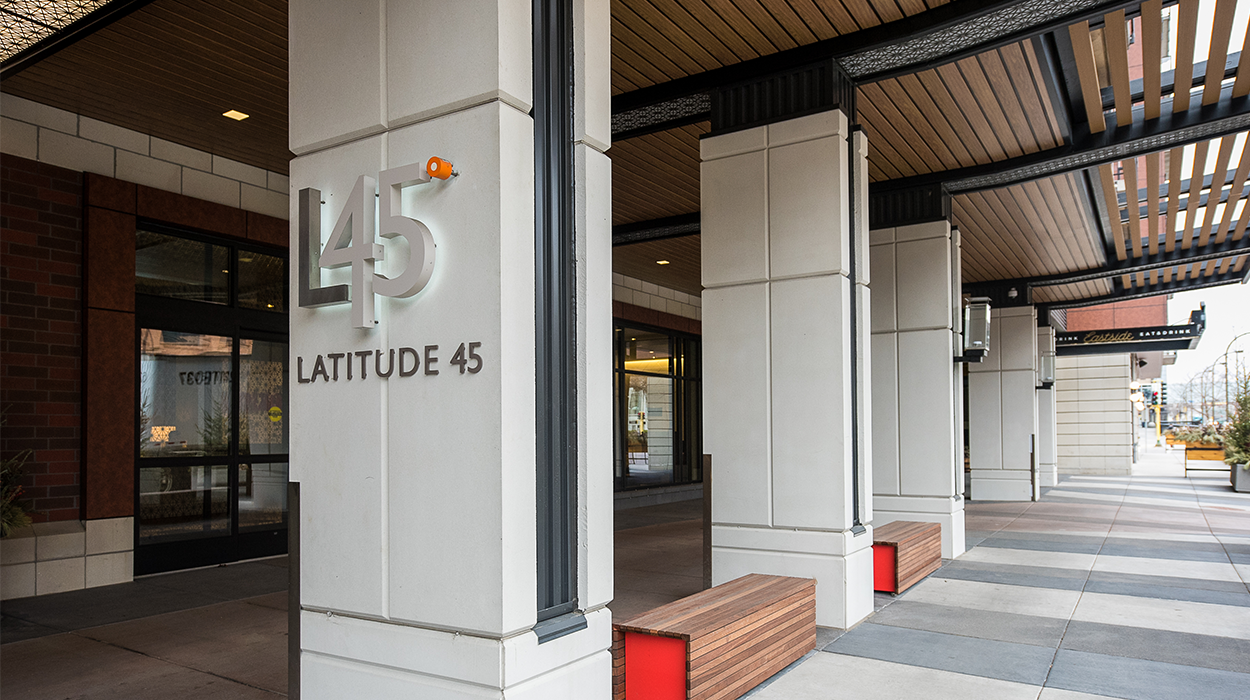 Further, since less heat escapes the building under construction, the potential lessens for condensation and mold to form and require remediation. In his presentation to Casanova and his team, Slattery went into the whole Thermax assembly process, emphasizing the speed and efficiencies it generates for a commercial project. “I remembered Kevin’s presentation and gave him a call,” says Casanova. “It clearly addressed the challenges we faced.”

Casanova, Slattery and Dow had to convince other key players – including architects and subcontractors – in preconstruction meetings and individual discussions to accept the new insulation system design and redesign the project. Many were accustomed to using solid exterior gypsum or sheathing first before installing traditional insulation.

Because Dow offers complete building science consultation, Slattery brought in Daniel Tempas, one of the three inventors of the continually insulated wall system. His building science expertise in collaboration with the architects helped address concerns about window, air and water testing of THERMAX and LIQUIDARMOR. For instance, Tempas applied water pressure to demonstrate the wall system didn’t leak.

Consider the issue of mold. Historically, buildings leaked a lot of air so mold didn’t form as easily. But with the need for them to be more energy efficient, buildings required more insulation and their building envelope tightened. Mold then became a bigger concern should a building enclosure leak and produce it.

Architects now have access to high-performing building materials. They include insulation with a built-in, tough exterior facer used with innovative sealing solutions, either for joint treatments or full coverage. When these solutions are matched with building science engineering to minimize condensation, architects can maximize building energy performance through a tighter building envelope. This delivers a cohesive system that controls air and moisture intrusion – and gives architects a high-performing building that instills the confidence of keeping the elements out.

As construction of the concrete and glass building proceeded in 2014 to its November “topping off” of the 13th floor in early November, project subcontractors embraced THERMAX and LIQUIDARMOR. In general, they praise the system’s exterior shell package in particular, noting its improved vapor and moisture seal. In addition, they cite labor and materials cost savings, explaining that a typical gypsum-based wall begins with a layer of gypsum that usually requires two workers to put the heavy gypsum boards into place. Further, it takes installation of a rigid foam, a base coat of the waterproofing membrane and a finish coat – adding up to four processes around the building’s exterior. The three-in-one THERMAX Wall System delivers an energy-efficient wall that manages moisture, requires fewer materials and delivers easier installation. As for installation, the THERMAX exterior insulation can be cut with a drywall saw and needs fewer cuts and fasteners. As a result, one worker can handle the installation of the lightweight exterior insulation.

As for LIQUIDARMOR, subcontractors consider the CM flashing and sealant to be a distinct alternative to flashing tape – with its peel-and-stick feature -- because LIQUIDARMOR is a liquid flashing alternative designed to provide commercial buildings advanced moisture and air sealing protection. The elastomeric spray forms a tight, durable and seamless barrier along the rough openings of windows and doors while also helping to reduce labor time significantly.

LIQUIDARMOR is fast and easy to use, installs quickly and conforms to complex geometries easily. And when used with THERMAX, it complies with critical code standards for determining air leakage of air barrier assemblies as well as water penetration of exterior windows that employs a uniform static air pressure difference.

Doran Construction’s Casanova notes that the THERMAX Wall System is so energy efficient, that when it was 5 degrees below zero outside, workers inside wore short-sleeve shirts. “That comfortable environment added 10-to-15 percent to productivity and lower heating costs saved $30,000-to-50,000 a month,” he figures.

Casanova also took an unusual and noteworthy step to ensure the THERMAX Wall Assembly system met expectations. He got approval from owner Alatus LLC to spend an estimated $70,000 for weekly inspections of the system “to make sure everything was buttoned up and on right,” he explains. He figures that cost – which was more than compensated for by an earlier-than-expected project completion and labor savings – would be far less than if a problem developed that sparked a lawsuit.

Casanova also had a meeting with city officials to show them updated drawings of the THERMAX Wall System and to show how it met NFPA 285 code requirements.

Casanova figures that the THERMAX exterior wall system cut in half the amount of temporary heat needed during the project’s winter construction and also improved efficiencies. “Basically, we eliminated the stage of putting on the weather barrier in the middle of the winter,” he said. “You have no condensation, so you get no susceptibility to mold later on. The system works really well.”

Upon Latitude 45’s completion in September 2015, Alatus principal Robert Lux publicly praised Doran Construction for completing the project ahead of schedule and under budget. Indeed, aided by the advantages of the THERMAX exterior wall system, the project took about 18 months instead of the original 20-22 month estimate. That meant that Alatus didn’t have to finance the project’s construction loan as long. More importantly, it meant that the Latitude 45 apartments could be leased sooner in 2015 – for Sept.1 instead of Nov. 1 – and generate revenue faster. Those two months proved significant since fewer renters want to move before the holidays.