Results from both material-based and whole-package shelf-life studies used to evaluate the microbial barrier properties of Tyvek® after aging show:

• Tyvek® has outstanding efficacy as a bacterial barrier, even after repeated challenges.
• Tyvek® maintains sterility even after five years of exposure to environments contaminated with microorganisms.
• Tyvek® retains its physical properties over time, allowing a package to maintain integrity.

DuPont has been testing the shelf life of Tyvek® since 1972. One notable study, initiated in 1978, was a long-term shelf-life study of Tyvek® 1073B and Tyvek® 1059B sterilized by ethylene oxide (EO). Conducted at the DuPont Haskell Laboratory for Toxicology, the objective of this study was to see how well these styles of Tyvek® would resist penetration by airborne bacterial spores.  This test was designed to have a more severe microbial challenge than typical real-world conditions.

First, the contents of the packages were tested for initial sterility. Then, every four months throughout the five years of testing, each stored package was sprayed with a uniform, massive dose of Bacillus circulans spores. To check sterility, 10 packages were withdrawn randomly every six months. Although viable spores were found on the exterior of the Tyvek®, not once on any sample over the five-year test period did any spores penetrate the lid of Tyvek® and grow on the culture medium. The study proved that Tyvek® is a remarkably reliable microbial barrier and can maintain sterility for at least five years, provided that package integrity is not compromised.

The data for that study and all aging-related studies of Tyvek® are for uncoated Tyvek®. It is important to note that any downstream operations, such as coatings applied by sterile packaging manufacturers (SPM), may affect the properties. 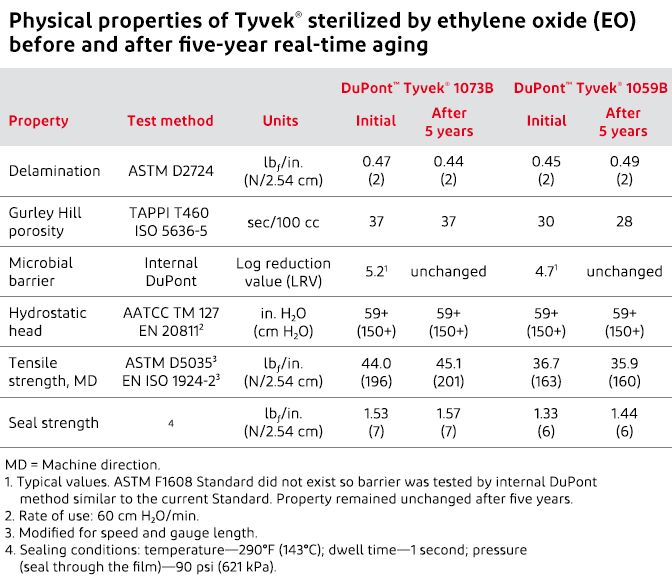 Tyvek® also performs very well in accelerated aging studies. In one study, samples of Tyvek® 1073B and Tyvek® 1059B were rotated through a cycle of extreme temperatures six times, equivalent to six years of aging. The cycle included two weeks at 130°F (54°C) and 17% relative humidity, two days at -4°F (-20°C), and two weeks at 130°F (54°C) with relative humidity between 70% and 80%. Afterwards, the samples were stored for five years at ambient temperature and humidity, after which they showed no statistically significant change in tensile strength.

Tyvek® 2FS™ was introduced after the accelerated aging tests were conducted on Tyvek® 1073B and Tyvek® 1059B. The accelerated aging test conducted on Tyvek® 2FS™ was done according to industry norms at that time. In this study, samples of Tyvek® 2FS™ were aged for 36.5 weeks at 138°F (55°C) and 75% relative humidity. The aged samples showed no difference in tensile strength, elongation or microbial barrier.

Tyvek® 1073B and Tyvek® 1059B have also undergone real-time aging tests after being terminally sterilized with gamma and electron-beam radiation. Tensile strength and microbial barrier were tested before and after aging. Results of the test demonstrate that Tyvek® is radiation stable. 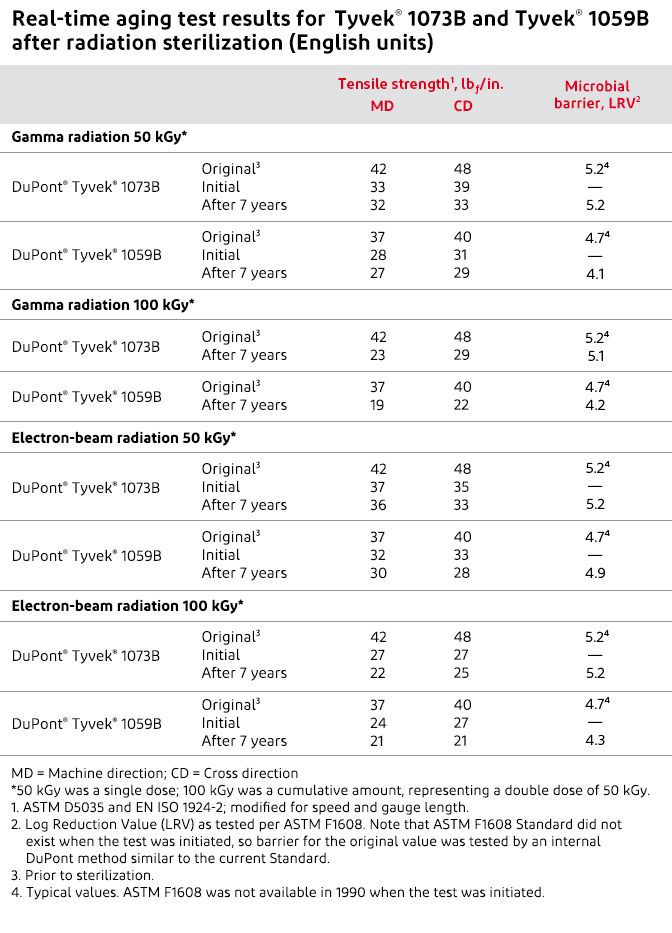 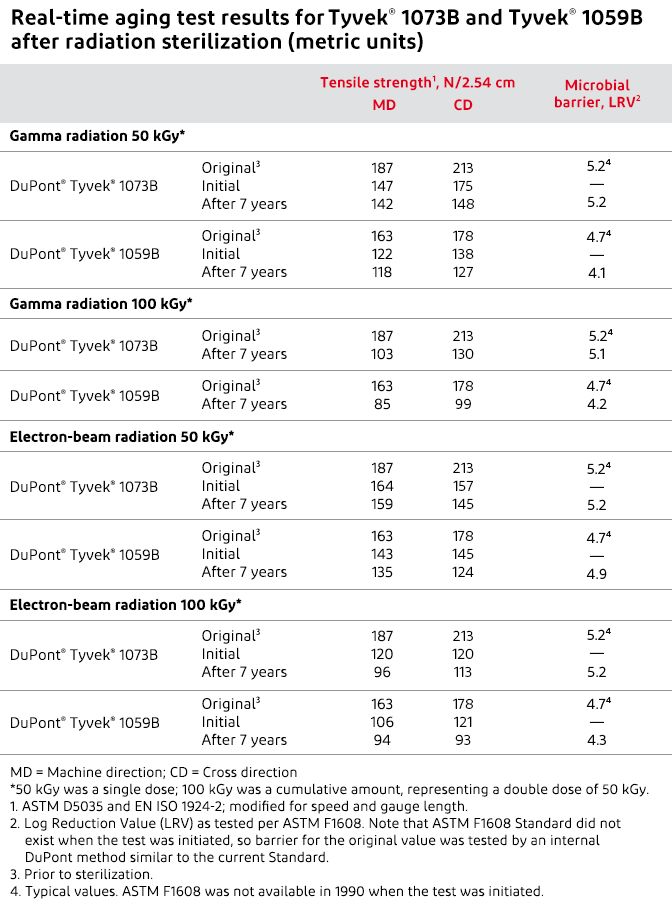 Another test demonstrated that the effect of gamma sterilization and aging on seal strength is negligible. Pouches of Tyvek® 1073B and 2.5-mil polyester/polyethylene were gamma irradiated (30 kGy) and then stored at 131°F (55°C) and ambient relative humidity for 10 weeks, followed by storage at ambient conditions for five years. At the end of the storage period, they were assessed for seal strength according to ASTM F88.

Based on the results from these and other tests, as well as real-world experience, it is clear that packages made with Tyvek® can provide long-term sterility maintenance of medical devices that have undergone terminal sterilization.