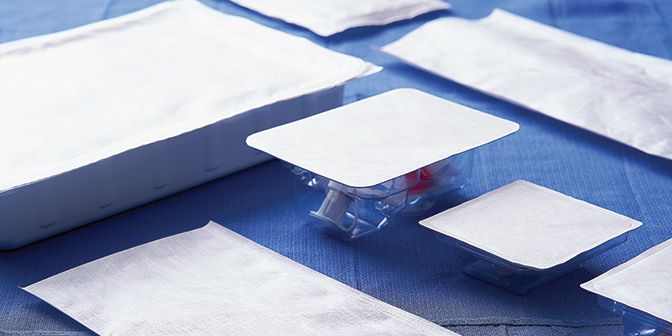 Unlike medical-grade papers and films, DuPont™ Tyvek® offers sterilization compatibility with all of the most commonly used methods for sterilizing medical devices. These include: ethylene oxide (EO), gamma, electron-beam, hydrogen peroxide gas plasma and steam (under controlled conditions). That’s because Tyvek® is made of 100% high-density polyethylene (HDPE), which is extremely stable when exposed to sterilant gases and high-energy sterilization processes. What’s more, Tyvek® is specially engineered to enable sterilant gases and steam to penetrate and escape quickly.

When it comes to sterilization compatibility, Tyvek® offers the broadest range of options.  And no matter which process you choose—EO, gamma, electron-beam, steam (under controlled conditions) or low-temperature oxidative sterilization processes—Tyvek® will retain its superior protective properties of microbial barrier and strength, as well as its color and flexibility. 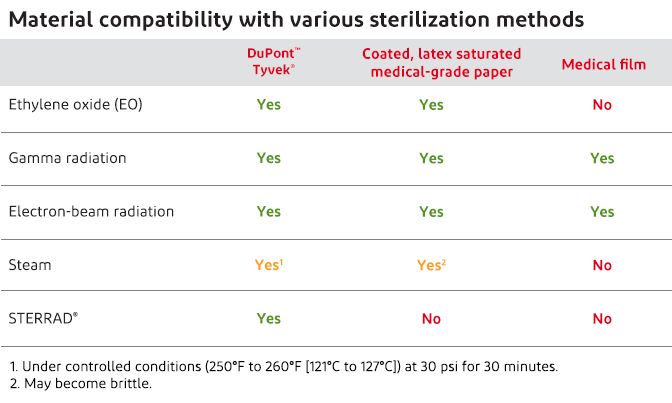 Ethylene Oxide [EO]
Ethylene oxide (EO) does not readily adsorb on Tyvek® and is released more rapidly than from cellulosic materials such as medical-grade papers, including synthetic fiber-reinforced paper. Tyvek® maintains its superior strength and microbial barrier properties after EO sterilization.

Gamma Radiation
After exposure to gamma radiation up  to 100 kGy, Tyvek® maintains its superior microbial barrier and the impact on strength properties is limited. These properties are also maintained after irradiation followed by exposure to accelerated and real-time aging.

Electron-Beam Radiation
After exposure to electron-beam radiation up to 100 kGy, Tyvek® maintains its superior microbial barrier and strength properties. Although specific studies of electron-beam sterilization followed by aging have not been conducted, we have not seen any effects other than those shown after gamma radiation and aging. This is because HDPE is radiation stable.

Caution should be used when choosing methodologies for package integrity testing after multiple doses of low-temperature oxidative sterilization because the water resistance of the material can be altered.

Medical-grade papers, including autoclave paper pouches, are not acceptable for use with the STERRAD® System because cellulosic materials neutralize the sterilizing agent.

ASP has developed a complete range of sterilization pouches and rolls using Tyvek® 4057B for the STERRAD® System.
More information about the STERRAD® System, including cycle times and performance details, can be found on its website.

Biocompatibility
Biological evaluation of Tyvek® styles for medical and pharmaceutical packaging was performed using testing methodologies according to ISO 10993 and United States Pharmacopeia (USP). In all cases, the styles met all the acceptable performance criteria. This also held true for samples of Tyvek® tested after exposure to sterilization by the EO, gamma and electron-beam processes, proving that Tyvek® meets all the acceptable performance criteria after sterilization. The results of the testing indicate biocompatibility—even after sterilization. 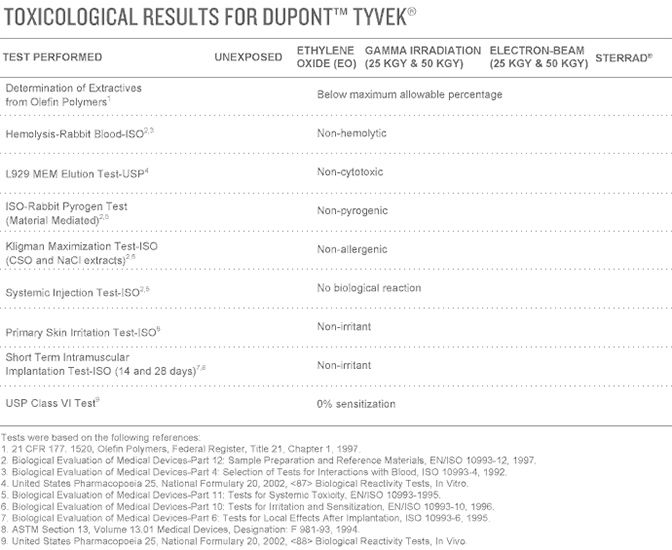